“I’m a grandmother multiple times over, and I absolutley ador it,” says Melissa Gilbert, whom you probably know best as spunky, pigtailed Laura Ingalls from the classic series Little House on the Prairie. With similair pluck, the 57-year-old actress is embracing her life today. “I am more comfortable in my own skin,” says Melissa, whose auburn locks are showing streaks of gray. “Yeah, I wake up in the morning and my ankles are a little bit stiff and there are parts of my body that are lower than they used to be, but I’m still me, I’m still vital.” 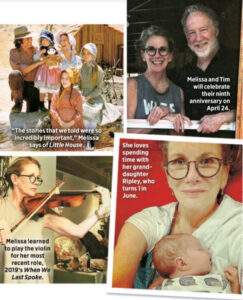 Adding to Melissa’s vitality is her happy marriage to actor-director Tim Busfield, 64, and all the fresh air they’ve been getting since they struck out for a new frontier: rural upstate New York. “We bought this ramshackle h

unting cabin,” she says, “and I startet going crazy: Let’s have chickens, let’s have cows, let’s have a horse!” Melissa recounts their adventure in her new book, Back to the Prairie: A Home Remade, A Life Rediscovered.

Though Melissa enjoyed her time on Little House, the ensuing fame was difficult for her to

handle and she found herself struggling with alcoholism, drug abuse and two divorces. “I have done some

things that I’m not too proud of, “she admits. But these daysm with her successful eight-year marriage, two grown children and her grandkids, she couldn’t be happier. “I’m a little kinder to

myself,” Melissa says. “Part of that is giving myself permission to just be. I spent so much of my life pushing and being ambitious that being still now is an even greater gift.”

Slowing down changed her world dramatically. “We became DIY farmers,” she sahys, noting it’s “physically and emotionally fulfilling.” The biggest plus is her “extraordinary partnership” with Tim, whom she met randomly at a bar. “I saw her smile and I was gone,” Tim’s recalled. He’s someone who “continues to lift me up and challenge me, and he makes me laugh every day,” Melissa marvels, calling him “my safe place.”

The tackled the new cabin together – and it proved extra challenging, despite Melissa’s experience on Little House. “My whole life was on the prairie,”she says, but she still had to “learn how the build a fire. 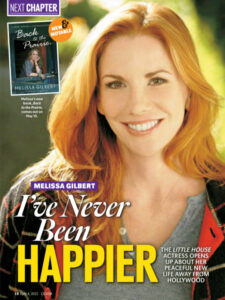 And we had to keep it going because we got into the house initially in the winter and we had no heat!”

The pandemic got them thinking about how they could better contribute and become more selfsufficient. During a thiem when, she says, “a lot of people were watching Little House for comfort,” Meli

ssa and Tim were living it, raising chickens in a coop they built. “I thought I had the brownest thumb,” Melissa says. “But I planted this garden, and it miraculously grew. We had all these wonderful vegetables!”

Living in their cabin – that now has heat and plumbing – with an RV where family can stay when visiting, Melissa really has found her safe place. And she remains grateful for her early years on the TV prairie. “I aspire to be courageous in everything I do, and a lot if that is like Laura,” she says. “My time on Little House really influenced my desire to have this life that I have.”

Find us on the following social platforms:
Recently
Updated
Photos
[ Hosting over 100 photos to browse through. ]
Visit Gallery

Melissa Gilbert Fansite is an unofficial, non-profit fansite run by fans and is in no way affiliated with Melissa Gilbert, her management, or any representation there of. We take no ownership rights to any photos, media or information posted on the site. Tags and watermarks on photos exist only for promotional purposes and do not imply ownership. If you feel any of the material rightfully belongs to you and want them removed, please contact us before taking any legal action, and the content will be removed ASAP